The riots, which began as a student protest in rejection of the rise of the subway ticket, already left a balance of 10 dead throughout the country 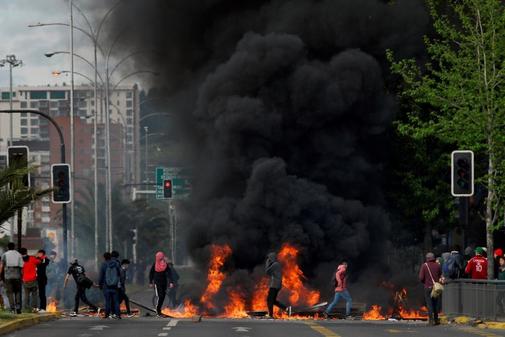 Riots in Chile due to the increase in the price of transport.

The president of Chile, Sebastin Piera has ensured that his country “is at war” on a night that increased the death toll from the g rave riots that erupted on Friday in the greatest wave of violence since the return of democracy in 1990. “We are at war against a powerful, implacable enemy, who does not respect anything or nobody and who is willing to use violence and crime without any limits, who is willing to burn our hospitals, the subway, the supermarkets with the sole purpose of producing as much damage as possible ” , emphasizes Piera. The riots, which began as a student protest in rejection of the rise of the subway ticket, already left a balance of 10 dead throughout the country . Two bodies were found after a fire in a construction site. The incident occurred during the afternoon after a mob of strangers looted and set fire to the site, according to El Mercurio. Order on Saturday the curfew to try to calm the situation and handed over security control in the Santiago metropolitan area and in other regions to the military authority. According to the Chilean head of state, the country confronts people with “a degree of organization and logistics that is typical of the criminal organization” . “I ask all compatriots to join in this battle that we cannot lose. We will not allow that violentists and criminals feel themselves owners of our country, “he added. Before Piera spoke at night, neighborhood groups organized to remove debris and clean subway stations affected by fires and vandalism . At the same time, social networks spread a striking and respectful dialogue between a soldier and two protesters. “You have the right to demonstrate, I only ask you not to break anything and respect the rights of third parties,” said the soldier. The dialogue ended in agreement and hands shaken. This Monday, Santiago test where he is able to reach a city devastated by violence and fear . “It is impossible for it to be a normal day,” said Santiago Metropolitan Mayor Karla Rubilar, the clearest and most empathetic voice in these days of bewilderment. “We ask for understanding, solidarity. If you get out in a car and you can take a neighbor to you We ask employers to understand that we need to be all united to get Santiago and Chile forward. Many workers will not be able to arrive on time, we need employers to understand it. And if they can provide transportation, put them, “Rubilar said. The Government also decided that taxis offer bus services, that is, transport several passengers on each trip .
According to the criteria of The Trust Project