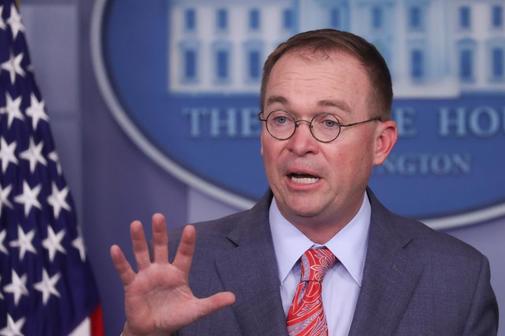 Mulvaney, during the press conference at the White House.
REUTERS

Trump, Biden and Ukraine: a call that opens the door to an ‘impeachment’ against the US president

Hunter Biden, the controversial son of Obama’s ‘viceroy’ in Ukraine
The White House has confirmed that it retained a package of aid to Ukraine in part because it wanted it to investigate the alleged corruption of the Democrats in the 2016 elections, although shortly thereafter it went back and denied that statement. “Mention (Trump) corruption related to the (e-mail) server of the DNC (Democratic National Committee, party secretariat)? Absolutely. There is no doubt about it. And so we withheld the money “that was going to stop in Ukraine, said Mick Mulvaney, the chief of staff of President Donald Trump at a press conference. “The review of what happened in 2016 was certainly part of what worried him (Trump) in relation to corruption in that country (Ukraine) And that is absolutely appropriate, “he added. Mulvaney refers to the president’s suspicion that a DNC server hacked by Russian intelligence agents and allegedly contains emails from his rival in the 2016 elections, Hill ary Clinton, was in Ukraine, about which there is no evidence. Mulvaney’s words have been the first official admission that Trump wanted to get something related to US electoral politics when retained the almost 400 million of dollars in aid to Ukraine something that is part of the investigation for a political trial against the president.

Suspected corruption of Biden and his son

The Democratic investigation prior to a possible political trial has been focused so far on the possibility of Trump putting another condition to deliver the aid: a demand for Ukrainian authorities to investigate the alleged corruption in Ukraine of former US Vice President Joe Biden and his son, Hunter . Trump has acknowledged that he pressured the Ukrainian president, Vladmir Zelenski, to investigate Biden and his son, but has refused to have withheld economic aid to get it. “E The money we withheld had absolutely nothing to do with Biden, “Mulvaney insisted Thursday.

Following the uproar caused by his words, Mulvaney said in a statement and blamed the Press : “Again, the media have decided to misunderstand my comments to promote a partial and political witch hunt against President Trump.” Let me be clear, there was absolutely no quid pro quo (Latin expression that it means something that is received as compensation for the cessation of something else) between Ukrainian military assistance and no investigation into the 2016 election, “he said.” The president never told me that we would withhold any money until the Ukrainians did something related to it. server. The only reasons we withheld the money was because of the concern about the lack of support for other nations and concerns about corruption “he said.” There was never any link between the funds and that the Ukrainians did something with the server – he insisted – this is explicitly obvious from the fact that the aid money was delivered without any action on the part of the Ukrainians regarding the server. “From Texas, where he moves today to give a rally, Trump pointed out, in response to a question about whether he had seen the Mulvaney press conference, that he had not seen it, but that he had heard that he had done “a good job”. “Mick is a good man, “said Trump. ” I have a lot of confidence in him, “zanj.