The Syrian Democratic Forces accuse Ankara of breaching the truce. According to local media at least seven civilians have died and 21 have been injured by Turkish attacks in the area between Bab al Jair and Um Ushbah 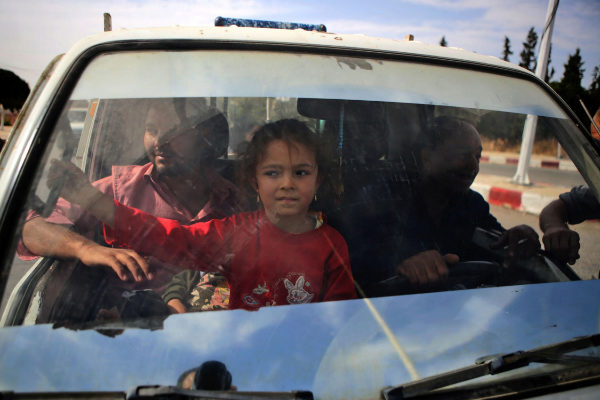 Syrians celebrate the pact between Turkey and the US to suspend the offensive: “Our blood has not been shed in vain”

Trump: In Syria “there is a lot of sand to play with it”
The projectiles have continued to rumble on the walls of the Syrian north during the first hours of cessation of hostilities for five days announced Thursday night. Turkish-backed militiamen and defense forces have clashed in Ras al Ayn, a border town practically besieged since yesterday. The Syrian Democratic Forces (SDS), who welcomed the ceasefire at first – during which they must withdraw from the northern part of the country – now accuse Ankara of failing to comply. At least seven civilians have died in local media and 21 have been injured by Turkish attacks in the area that includes the towns of Bab al Jair and Um Ushbah. “Despite the agreement to stop the fighting, air and artillery attacks continue to strike positions of combatants, civil settlements and the Ras al Ayn hospital,” Mustafa Bali, a spokesman for the Kurdish militias, has denounced on Twitter. The Syrian Observatory for Human Rights has corroborated the situation, at the same time as it has warned that the proturgery brigades are not allowing the entry of a humanitarian convoy to the fenced people, although President Donald Trump called Thursday “great day for the civilization “, on the ground things look different. The statement signed by the delegations of Turkey and the US that day is, in the eyes of the observers, full of vagueness and lack of definition, which can give rise to double or triple interpretations. For example, it does not delimit the exact terrain of northern Syria from which Kurdish forces must withdraw or what role the Syrian army plays, which is being deployed in the region, and ambiguities seem to play on the Turkish side, judging by the covers of Your press this Friday. “ Turkey achieved all that it wanted ,” says the pro-government newspaper Sabah. “We won both on the ground and at the table [de negociaciones]”. Indeed, after signing the agreement, Trump could take a triumphant photo and Ankara see his sanctions lifted. But, as the local newspaper Yeni Safak acknowledges, to be during a trip to Russia, the next part, when everything is completed with the dealer of Syria. October 22, just when the deadline agreed with Washington for a withdrawal of forces is over Kurdosirias who, for now, do not see, Turks and Russians will resolve the aspirations of President Recep Tayyip Erdogan. Turkey does not seem willing to allow Manbiy and Kobane, both locations currently patrolled by the Syrian army – the result of a Kurdish pact – Damascus signed after the start of the Peace Spring operation – remain Kurdish forts. “Security is important, but there is also a humanitarian side, the return of refugees … We are talking about an area about 32 km deep and 444 km long along the border,” said the Foreign Minister. Mevlut avusoglu, his plan for Syria. “We discuss some parts [del plan] with the US. We will discuss Manbiy and other parts of it with Russia and, soon, we will take the necessary steps to ensure that the entire region becomes a safe area.” Turkey says that, among its intentions, it is that of return to the territories between one and three million Syrian refugees in their country. Meanwhile, its operation continues to generate displaced. The United Nations has reported Friday that 1,700 people, mostly women and children, have fled to Iraqi territory in recent days. The UN estimates that 166,000 people have been forced to leave their homes since the beginning of the Turkish Arab offensive on October 9. This Friday, in addition, Amnista International has published a report accusing Ankara and the Turqua brigades commit possible war crimes. The organization points to “indiscriminate attacks on residential areas, including a home, a baker and a school at the hands of Turkey and its allied forces.” Add to them the summary executions of several civilians at the hands of the Ahrar al Sharkiya militia on a highway in the region, including that of the Hevrin Jalaf policy. “Turkey is responsible for the actions of the armed groups Syrians who support, arm and direct, it seems, Turkey has given these armed groups a free hand to commit serious violations in [la regin noroccidental de] Afrin and elsewhere. We call Turkey again to end these violations, to render accounts with its perpetrators and protect civilians living under his control, “says Amnista. “Turkey cannot evade responsibilities by outsourcing war crimes to armed groups.”