Upon arrival at Elseo, Macron praised all his predecessors except Hollande, the man who made him a minister. History repeats itself: Chirac hated Giscard and Sarkozy 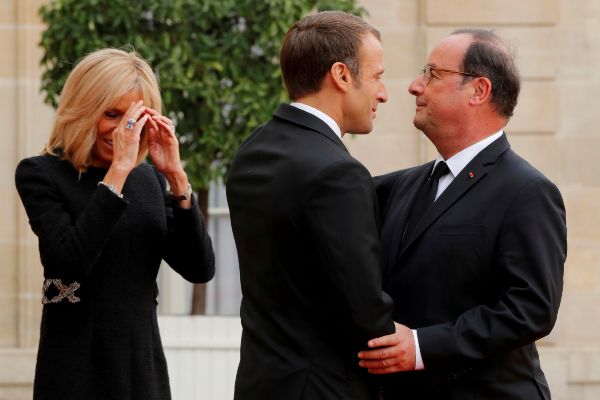 The French president, Emmanuel Macron, and his wife Brigitte greet their predecessor at the Elseo Franois Hollande, after the funeral of Jacques Chirac.
Philippe Wojazer / REUTERS

Jacques Chirac, the last Gaullist dies
The funeral of Jacques Chirac on September 30 brought together all former presidents of France alive, Valry Giscard d’Estaing, Nicolas Sarkozy and Franois Hollande and the current tenant of Elseo, Emmanuel Macron. Image of national unity and continuity of the State, true. But also protagonists of betrayals and grudges . Intimate enemies for half a century. In the midst of the overwhelming elegance of the deceased in those days of mourning, there are those who remembered that Chirac was traitor and betrayed. “For 40 years, this carnivorous tie does not stop devouring its rivals. A bloody hunter Chirac . Messner, Chaban, Giscard, Pasqua, Balladur, Jospin, Le Pen, all torn to pieces by knife […] This man had a mental prison where he locked enemies and traitors, cooked with pepper. In Chirac slept a terrible saury, a crocodile of mists […]. The only one who was resurrected was Sarkozy, cursed son and triumphant successor. “The appointment is of the writer Marc Lambron in ‘Le Figaro’ and reviews an exceptional political career. Macron only treated him when he was already president. I fulfilled him like all his predecessors except Hollande. The man who made him an advisor and minister committed the awkwardness of laughing at his relationship with Brigitte, which he called “old.” To ostracism. Let’s start at the beginning. 1974. Gaullism has a candidate, Jacques Chaban Delmas. The young and ambitious Chirac prefers Giscard and mobilizes a group of parliamentarians of his rope in favor of the centrist. The old guard calls him a traitor but the new president appoints him prime minister. Last two years. Giscard wanted a subordinate. Chirac, power. Their enmity lasted until death separated them . Even more. Because in a recently published book (‘Ici, c’est Chirac’) and that collects conversations of historian Jean Luc Barre with the deceased president, he ridicules him mercilessly. “Giscard had made me understand that I should walk a few steps through behind I. Being the president and I prime minister, we went together to a charity sale. When we approached the box office, I asked for him to advance him. Fing that he only had money for my entrance. It’s the only time I saw Giscard take money out of his pocket. And the last thing he let me go before him. ”

The praise of a miser

In addition to his greed, Giscard is clebre by his haughty . Ava Djamshidi and Nathalie Schuck tell in ‘Madame la prsidente’ that Macron, once elected president, went to visit him. Giscard, as a compliment, told him: “Young man, you would have deserved to work for a great president like me!” We are already in 1993 and Franois Mitterrand is walking towards the decline of his second presidential term. The Socialist Party is swept in the legislative. The second cohabitation will begin and Chirac does not want to be again the prime minister of a socialist president whom he aspires to succeed. He decides that his “30-year-old friend,” Edouard Balladur, occupies the position. The stunned technocrat culminates a race in the shadow of Chirac. But, in the heat of favorable polls, the ambition to be president is incubated and a candidate is proclaimed dragging almost the entire party, including a very prepared young minister whom Chirac and his wife Bernadette consider almost a son, Sarkozy. Chirac seems finished but he recovers and wins. All traitors are left without charge . Sarkozy was the only one who remade his career. To the point of succeeding him in Elseo. Chirac never forgave him. Sarkozy sought reconciliation even at the funeral of Chirac’s daughter in 2016. Before he had to swallow that in the campaign of 2011, during a visit with Hollande, Chirac said before the microphones: “As Alain Jupp does not show up, vote for you”. The political earthquake was such that Chirac had to publish a statement saying it was a joke.

A year later, the socialist was elected president and called a young Macron Elseo, who will minister and Let him weed the grass. Their relationship was twisted when Macron was absent several days because of his grandmother’s agony. Manette had been a teacher and was the only one in the family who supported her relationship with Brigitte, a teacher, married and with three children that Macron fell in love with when she was 17 years old. Upon returning from the funeral, Hollande ironized about his absence and Macron said: “What he has done to me, I will never forgive him.” Hollande, whose lovers were younger, reads Brigitte whom he called “the old woman.” In addition, at a dinner he said that Macron was obliged to appear to the 2017 presidential elections because his wife will be very old in 2022. The Macron have not forgiven him and he is the only former president with whom they have no contact. On the contrary, with Sarkozy the contact is regular and fluid. To the point that he asks for advice and they dispatch regularly. Although theoretically they are in opposite political fields. In addition, Brigitte and Carla Bruni get along well. Bernadette Chirac is known to vote for Macron, convinced by a grandson of the late president who is campaigning for the current tenant of Elseo. But they didn’t know each other until Macron went to visit him. Chirac wanted to thank him for the gesture and presented him with a bronze medallion of General De Gaulle . He had been given to him by his mentor, Georges Pompidou, and he always had it at his desk both when he was mayor of Paris and when he became president. Macron had it seen during his speech. Giscard, Sarkozy, Hollande and Macron attended the solemn funeral of Chirac held in St. Sulpice. His hatreds, betrayals and grudges were not visible to the cameras, which left a record of the continuity of the V Republic. But they are in history. And in the present.