His anti-system, anarchist, austere and ultra-conservative profile at the same time has seduced parties from across the ideological spectrum but especially the young Tunisians disenchanted with their political lite, after more than eight years of broken promises 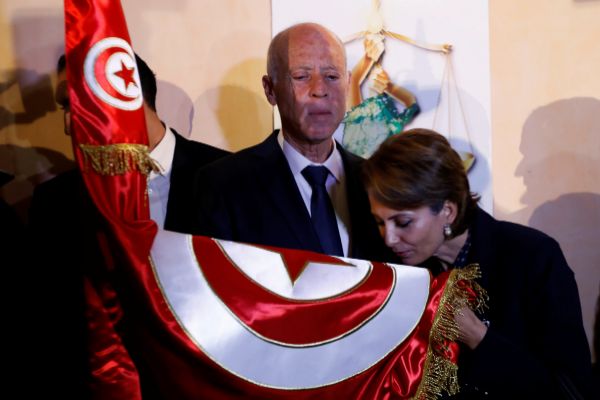 The guardians of Tunisian democracy
“The Tunisian people have given a master lesson in democracy to the entire world.” It is said by someone who knows how to sit chair: Constitutional Law professor Kais Saied, proclaimed this Monday the new president of Tnez after sweeping the elections on Sunday . “I have initiated a new revolution,” were his first words to his followers as the new head of the Tunisian State. His choice is a reaction against the political literacy that has ruled the Tnez of the post Ben Ali era for more than eight years and that has failed to improve the standard of living of the population or end corruption and nepotism . They were some of the demands demanded by the young people who rose against the dictatorship. Today Saied is the voice of the disenchanted with the revolution. With 61 years, his anti-system profile and with anarchist dyes has seduced youth and the left . At the same time, his ideas are dotted with ultraconservative ingredients, such as the defense of the death penalty, his refusal to legalize homosexuality or the refusal to change the law so that women inherit just like a man, which has captivated Islamists He is austere, but at the same time, elitist (he speaks in classical Arabic and not in Tunisian dialect, which elevates him above the town), speaking the language of the right. Without a program or a political structure supporting it, Saied has become president leading the anti-politics . According to the official results offered Monday by the Independent Electoral Instance, Saied has obtained 72.71% of the votes . It has surpassed 55.68% achieved by Beji Caid Essebsi (whose death in July precipitated these elections) in the 2014 presidential elections. It has also been imposed in all constituencies. 90% of its voters have been young people between 18 and 25 years old, according to the Sigma Conseil polling institute. His rival this Sunday, tycoon Nabil Karui, accepted the result and congratulated the new tenant of the Palace of Carthage.

An attractive and dangerous discourse

During his campaign, he defended a particular political system that seeks to return power to the people through what he calls the “direct democracy” : His proposal is to reform the system making the parties and Parliament itself disappear to establish local committees that are not based on ideologies instead. Those committees, in turn, will elect their regional representatives, and from them the national committees will emanate. “It is a dangerous discourse. Its model resembles that of Muammar Gaddafi in Libya, a system without political parties. This populist ideology seduces youth, who believes that Kais Saied is a revolutionary democracy,” he analyzes for EL MUNDO.es Ridha Tlili, politologist and hispanist .Your real options to change the system are, however, limited. You will need to change the Constitution promulgated in 2014 for which you need more than two thirds in Parliament. Having no political party of its own, this seems difficult. “They are speeches, nothing more. But it is attractive to the disenchanted. It is not in the powers of the president to change the system,” says Tlili. “We will work within the framework of the Constitution,” said Saied after winning the elections. “This revolution contains a human dimension and unites principles on which we agree, it has added according to the local press.

Born on February 22, 1958, Saied comes from a middle class family He is married to Ichraf Chebil a judicial advisor in a court of first instance in Tnez, and has three children. University professor, a year ago he retired from teaching. But he has not shaken his air , which together with his diction in Arabic fus’ha somewhat theatrical, has earned him the nickname of The Robot. Saied was a member of the committee of wise men who helped the Constituent Assembly to draft the new Magna Carta finally adopted in 2014. In recent years he had gained some fame by participating in television gatherings commenting on the drafting works of the post-revolutionary legal framework, among his faithful are his former students but also the young people who saw him participate in the seated days and the Casbah, when after each of the dictatorship, the revolutionaries tried to prevent the regime from regenerating. “We will not take a step back in what we have achieved in terms of freedoms,” he said. In one of his first speeches as president health to the “brother town of Algeria”, immersed in a wave of protests against the regime since last February, and has promised to visit this country in his first official visit . Then, travel to Libya.