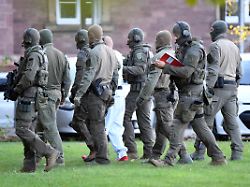 After the terrorist attack in Halle new details on the police operation are known: The police lost the assassin during his escape for an hour out of sight – rejects allegations for use but still back. Meanwhile, Seehofer gets a lot of headwind with his criticism of the gamers scene.
The police lost sight of the assassin of Halle during his escape for an hour. This was reported by several members of the Landtag from a special meeting of the Interior Committee in Magdeburg. Finally, it was two police officers from Zeitz managed to arrest the perpetrator, said SPD interior expert Rüdiger Erben. Unlike previously thought, it was therefore not special forces that provided the culprit. Saxony-Anhalt’s Interior Minister Holger Stahlknecht from the CDU and his team provided detailed information on the police operation on the Tattag. To sum up, the police have done many things right and little wrong, Erben said. The charge that the police had been with too few forces on the ground, he deemphasized. In fact, several radio patrol cars were quickly on the spot. Last Wednesday, the heavily armed Stephan B. tried to get into the synagogue with more than 50 worshipers. When this failed, he shot a 40-year-old passerby and shortly thereafter a 20-year-old man in a nearby Dönerladen. On his escape, the shooter seriously injured a couple. The 27-year-old German has the offense of anti-Semitic and right-wing extremist motives confessed. He is in custody. The opposition also held back with criticism after the special session, but still sees a need for clarification. The question was still unclear why the perpetrators could escape from Halle, said the leftist interior expert Henriette Quade. AfD parliamentary leader Oliver Kirchner said it was irritating that Stahlknecht claimed that the police operation had gone well. He again criticized that the synagogue in Halle was not under permanent protection before the act. It had long been warned of growing anti-Semitism, said Kirchner.

Meanwhile, the criticism of Interior Minister Horst Seehofer does not stop. CSU Vice Dorothee Bär, who is also the Minister of State for Digitization at the Chancellery, and Federal Transport Minister Andreas Scheuer rejected Seehofer’s criticism of the gamers scene in connection with the attack in a CSU board meeting. Also CSU boss Markus Söder warned in Munich, without mentioning Seehofer, in the processing of the attack of Halle before lump-sum sentences against the Gamerszene.Aussagen of Seehofer had triggered criticism on the weekend. The program “Report from Berlin” had spread it via Twitter. Among other things, the minister said, “Many of the perpetrators or potential perpetrators come from the gamers’ scene.” Seehofer was accused, among other things, of distracting from the problem of right-wing extremism and to put gamers under general suspicion. The assassin of Halle was on the gamers scene. Before the terrorist attack, he had published a roadmap that looks like a scripted version of a computer game. “Any negative development has to be seen, but on the other hand, it’s clear that there can not be any blanket judgments,” Söder said. “Because the gamer, and there are many, many young people who do great things” – and are also an important industry. “In general, we are glad that the games scene even exists.” It is only important to “look where problems are, as everywhere”. According to the participants, Bär said in the meeting that in Bavaria and Germany a lot was being done for the games promotion. Without mentioning Seehofer by name, Bär said that one can not be ruined with “one sentence”. It would be like breaking your ass with your ass for years, she added. Scheuer pointed out that there were developments in the games industry in navigation devices, for example. Just because one can order evil things on the Internet, no one wants to ban the Internet immediately.

No general suspicion against Gamerszene

The Interior Ministry rejected allegations of putting gamers under general suspicion after the terrorist attack in Halle. “It’s about combating the most serious crimes and finding those potential perpetrators – extremists or other types of perpetrators – in all areas in which they move,” said a spokesman for the ministry. Experiences showed that certain perpetrators were mainly in the network to connect and communicate, the spokesman said. This happens also in gaming platforms. “This is not intended to discredit the entire gaming industry or gamers,” he said. Just because you’re playing a game, you’re not a potential offender at the same time. That is also the position of Federal Interior Minister Horst Seehofer. The spokesman stressed that Seehofer wants to commit Internet providers to reporting criminal content, especially in hate crime. In individual cases, the Federal Criminal Police Office must also get the associated IP addresses. In addition, the protection of the constitution and the Federal Police should also be allowed to carry out the source TKÜ. This type of telecommunications monitoring (TKÜ) makes it possible to listen to chats and voice messages, which are sent encrypted. In addition, intelligence agencies and federal police should be able to search online. For the background of Halle’s terror, see TVNOW for a detailed chronology of events.